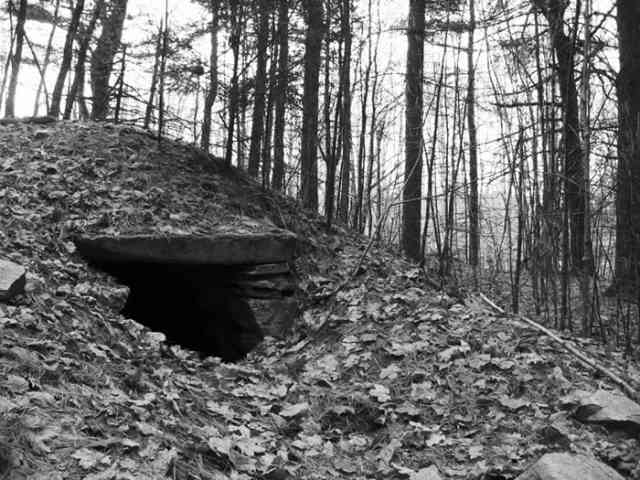 I am interested in the many old stone-built walls, chambers, piles and cellar holes that dot the New England countryside. The age and origin of some of these sites is a mystery. Some are likely to be fairly recent, but I believe that many of these places date back to the time before Columbus and that some may be truly ancient. Here you will find my photos of a number of different sites in New England. If you have any information to share about any of these places or if you know of any sites not on this list that I could visit please e-mail me.

Bridgewater MA This is a fairly large stone chamber near Lake Nippenicket in Bridgewater that appears to have been either built or modified in historic times, possibly for use as an ice house.

Danbury NH structure A small chamber-like structure near a road in Danbury NH.

Easton MA A small chamber near a lake in Borderland State Park.

N. Grosvenordale CT A unique chamber on private property with two rooms inside.

Leicester MA "Potato Cellar" A small round chamber on private property. A town history refers to this chamber as a "potato cellar."

Leicester MA "Airport Chamber" A small rectangular chamber near old foundations on an abandoned road near the Worcester Airport.

Littleton MA forest chamber A small chamber and other stonework on conservation land.

Montville CT Chamber Montville Connecticut is a town rich with interesting stone structures and ruins. This small chamber is on private property. The landowner told me that the land has been in his family for centuries and that as far as he knows, the chamber has always been there.

Montville CT "Complex" Two stone chambers and other enigmatic stone ruins cover a large area on a hilltop in Montville.

Montville CT "Soutterain" Chamber This chamber is a narrow tunnel that extends 38 feet into a hillside. The chamber was discovered in 1938 when a hurricane uprooted an old tree that collapsed part of the tunnel near the entrance. This structure bears strong similarities to some prehistoric structures in Europe.

Norton MA A stone chamber and terrace built into a walled enclosure in a hillside.

Norwich VT A collapsed stone chamber asociated with walls and other ruins in the woods.

Pelham MA A small round chamber near an old cemetery.

S. Royalton VT There are a number of stone chambers in the South Royalton VT area. This is a locally well-known underground chamber not far from the Joseph Smith Birthplace Memorial.

Webster MA This well-preserved stone chamber on private property in Webster is located near a stream bed and a former Indian trail. Members of the Nipmuc tribe today believe that this chamber was built by their ancestors.

Wendell MA Two small "twin chambers" located near a road and house foundation. Offerings found inside may indicate recent Native American use of this site. For more detailed information and interpretation of this site please visit Stone Structures.

Upton MA "Cave" This is a very well-known and impressive man-made stone chamber which many have argued was built in prehistoric times.

Stone Piles
There are likely many thousands of stone piles in New England in a wide variety of locations. Similar sites can be found throughout the area where Algonquin-speaking Indians lived. Some of these piles have been shown through excavation to be prehistoric and many believe that some of these piles are Native American ceremonial structures. Peter Waksman has a fantastic blog with information about these sites at Rock Piles.

Attleboro MA Stone piles in a tiny patch of woods, on a rocky slope next to a stream.

Chesterfield NH Stone piles, walls and other features I spotted near a mountaintop in Pisgah State Park.

Douglas MA A variety of features in the Douglas State Forest.

Glocester RI I was thrilled to stumble upon this site with many well-built stone piles, the chamber-like "Shepherd Hut" and many other interesting features.

Haydenville MA Stone piles and other walls on and near hilltops and streams.

Montville CT Well-built stone piles and other features near the "Souterrain" chamber.

Montville CT Rock Shelter Site A site on private property in Montville CT with rock outcrops with shelters and caves rising above a wetland with stone rows and piles.

Southborough MA This property owned by EMC Corporation and currently slated for destruction features numerous well-built rock piles and stone rows on hills near a wetland.

Wyoming RI Stone piles aligned in rows near a swamp in the woods of Wyoming RI.

Other Sites
Other historic and prehistoric lithic sites.

Franklin MA "Indian Fort" A complex of walls, earthworks, balanced boulders and other features near a wetland. Some of these walls may have been built in modern times but there are possible indications of a Native American presence here as well.

Lowell-Dracut-Tyngsboro State Forest, Massachusetts A site with rock piles and other features near ponds in the forest.

Leicester MA Historic stonework in the woods of Leicester.

Middleboro MA "Hand Rock" On "Indian Hill," a Native American petroglyph of a hand and wrist.

"King Philip's Cave," Sharon MA A rock shelter that some believe was used by Indians for ceremonial purposes.